Do facts matter any more? 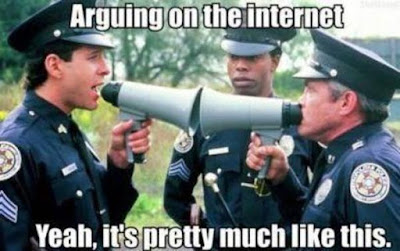 Beyond posting pictures of my kids for my family to see, I don’t spend much time on Facebook, but today I made an exception when I saw somebody claiming that the Queen is “worth £57bn” and criticising her for taking £360M of tax payers money to fix up Buckingham Palace. I couldn’t resist pointing out that she doesn’t own Buck House so she wouldn’t be paying for the repairs and, more importantly, she isn’t worth anything close to £57bn. According to the Sunday Times Rich List her wealth is around £360M.


This led to a discussion on various aspects of law between me (Post Graduate Diploma in Law, Called to the Bar and admitted to the Roll of Solicitors) and a man who claims a MSc(Hons) in General Knowledge – I don’t know if that’s a real qualification or not but it sounds made up. The discussion moved across property law and the law of trusts. It ended when I made the comment that my interlocutor clearly lacks basic knowledge of the law of trusts and equitable obligations. He promptly blocked me. I am told that he made a further comment complaining that I had insulted him and that I should respect his genuinely held belief about the wealth of the Queen and how trusts work, despite the evidence not supporting the former and him being wrong on the latter.


This got me thinking about the modern phenomena of people who seriously believe that their opinion should be listened to whether or not it is supported by facts. If you spend much time on Twitter or Facebook you’ll see this attitude but it isn’t confined to the internet. A while ago a friend told me he wanted the UK to leave the EU because he was fed up of people coming from places like India to take British jobs. I asked him how the EU affected immigration from India, he didn’t know. I asked what aspects of Tier 1 entry he was unhappy with, he didn’t know what it was. The story was the same for the other immigration routes. He was outraged that I dared question him on the facts behind his opinion and told me that they didn’t matter because, “this is what I believe”.


It’s not just lawyers who put up with this nonsense. Despite there being clear and compelling evidence for climate change, a round Earth, evolution and the Moon landings there are still strong movements across the world who deny all of these things – yes flat Earthers are very much real and with us in the 21st century! The one thing they all have in common is that they demand others respect their beliefs.


It’s been said that we have moved into a post-factual world and that seems true. We certainly seem to be in a world where people think their views are important, valid and worthy of consideration even where they are based on fallacy, mis-information and myth.


Is it insulting to say somebody doesn’t understand a topic? No. Not if it’s true. Had my Facebook friend been an expert tax lawyer or my real life friend an immigration expert then it would be very insulting but that’s not the case. People often seem to think there’s something wrong in admitting to not knowing something and they become upset if somebody who does know more tells them they are wrong.


Does everyone have the right to have their opinion respected and listened to? No. If I rock up to an operating theatre and tell the surgeon that in my opinion he should be doing open heart surgery under local anaesthetic to aid post-surgery recovery the surgeon would quite rightly kick me out because my opinion is worthless and backed up by no facts or evidence. Yet when it comes to immigration, law, fiscal policy, etc people expect to be taken seriously despite having no more knowledge about their topic than I have on open heart surgery.


TV is guilty of promoting this with their constant search for balance on topics where balance means well qualified and knowledgeable people put up to argue against the untrained and ignorant. How else can we describe the debate on climate change broadcast by the BBC between Nigel Lawson (former Chancellor of the Exchequer) and Professor Sir Brian Hoskins, world respected dynamical meteorologist and climatologist at Imperial College London?


We all get a little carried away sometimes, especially when a strongly held belief is challenged. But, if people took a moment to reflect that often our opinions are based on a gut feeling, a sense of injustice or moral righteousness and not on any actual facts then the world (especially the online world) might get a little more pleasant. Unless you’re a Brexiteer in which case YOU ARE WRONG WRONG WRO… oh, sorry I got carried away there, I’ll try not to let it happen again. Even our strongest beliefs might not be correct and there’s nothing wrong with being wrong provided we are willing to adapt our thinking to match new facts.


Will that happen? Probably not.
not law