Showing posts from February, 2015
Show All

Is grooming girls to join ISIS different to grooming for sexual abuse? 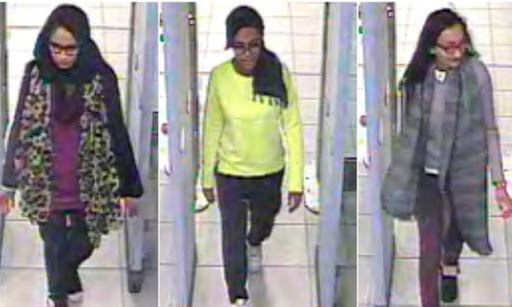 Last week three schoolgirls from Bethnal Green in east London secretly met and began travelling from the UK to Syria where they intend to join Islamic State (ISIS).  The thing that struck me most was not that they made this journey but that so many people in the UK have such a heartless attitude to the three girls.
Many people on Facebook and Twitter take the view that the girls are little more than terrorists and deserve what’s coming their way.  In the Independent, Grace Dent called the girls “ISIS fangirls” and went on to say that children running away to join ISIS should not be allowed to return to the UK.
I can understand why somebody would take that attitude but I don’t think it is a position that holds up to analysis.
Some years ago I represented a man who groomed children for sex.  I’ve met quite a few such men but this one was by far the most successful I’ve come across.  He convinced whole families of what a nice man he was.  He persuaded parents to sign “modelling” permission …
1 comment
More gibberish >>

This is the third time I have returned to the subject of revenge porn (previous posts are here and here) and I’d like to make clear from the outset that I am not some sort of pervert worried that his fun is going to be ruined by this new law… okay I’m not just a pervert (that’s a joke by the way).
The offence is now on the statue books and is contained within the brand new Criminal Justice and Courts Act 2015, which received Royal Assent last week.  Section 33 makes it a criminal offence:
“for a person to disclose a private sexual photograph or film if the disclosure is made— (a)without the consent of an individual who appears in the photograph or film, and (b)with the intention of causing that individual distress.”
Note there that the Act is talking about a “disclosure”, not a publication.  So, while it is convenient to think of somebody posting a picture of their ex to the internet this offence could be committed by showing the photograph, for example to people in the pub, without act…
2 comments
Location: Richmond, Richmond, Greater London TW9 1RB, UK
More gibberish >>

As we all know Europe’s sole reason for existing is to frustrate the British Government and annoy the British people with their directives, regulations and pesky decisions of the European Court of Human Rights.
The minor fact that the European Union has nothing to do with the European Court of Human Rights (ECtHR) is just a technicality – they’re all in it together.
A big complaint among those opposed to Europe is the ban placed upon us by the ECtHR preventing us from locking up murderers and throwing away the key.  I did point out what a lot of nonsense this is more than a year ago in January 2014 in Aiming for a century.
In a nutshell the problem arose because the UK government abolished the review of whole of life sentences that used to take place when they were 25-years into their sentence.  The ECtHR, not unreasonably, puts rehabilitation at the core of the convention – the idea that somebody can atone for their crimes and one day earn their freedom.  This doesn’t mean it should…
2 comments
Location: Richmond, Richmond, Greater London TW9 1RB, UK
More gibberish >>
More posts