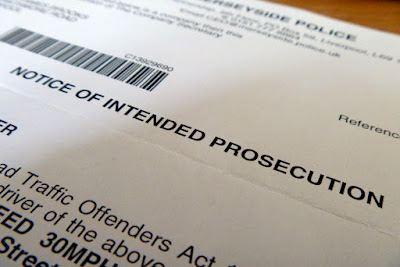 
If you don’t already know, section 172 of the Road Traffic Act 1988 requires the registered keeper of a vehicle to identify the driver of the vehicle when the police allege that the driver at the time was responsible for an offence. If you’ve ever had a speeding ticket through the post then you will probably have been sent one of these documents sent out with the Notice of Intended Prosecution. Failing to provide the information is an offence in itself that carried a fine and six penalty points. There are technical legal defences but the most common defence I’ve seen is people giving evidence that they did return the form but it got lost somewhere along the line.


In general, when a person gives evidence that they posted the section 172 notice having completed it properly the court tends to believe them and finds them not guilty. A very common variation on the theme is where the defendant says that he or she completed the form but gave it to somebody else to post or put it in their outgoing post at work. If you hand it to somebody else to post then you can call that person to prove that they did post it. If you put it in the outgoing post box at work then you usually only have your own word to rely on; however, in my experience that is good enough.


I can understand why courts have accepted that putting the section 172 notice in the outgoing post is sufficient since if that is how you generally post your letters and your letters typically arrive then you can have a high expectation that the section 172 notice will also arrive safely. However, the Queen’s Bench Division of the High Court (QBD) said last week that this is not good enough to escape a conviction in a case called Phiri v Director of Public Prosecutions (currently unreported).


Sir Ross Cranston sitting in the QBD held that section 172 must be interpreted so that it provides a practical, fair and enforceable system for identifying the drivers of vehicles. Section 7 of the Interpretation Act 1978 tells us that putting the completed section 172 notice in the post yourself completes the requirement to give the information but putting it in the outgoing post does not. Sir Ross decided that in relying on a third party to post the section 172 notice Mr Phiri had not discharged the requirement to provide the information.


On the face of it this is a bit of a nonsense because what the court seems to be saying is that you should not rely on a third party to get the completed section 172 notice from your hand to the post box; however, you can rely on a third party (the Royal Mail) to get the notice from post box to the hands of the police staff responsible for processing it. This is, of course, the result of the Interpretation Act 1978 and so whether you agree with Sir Ross’s decision or not it does now seem to be the law.


So, here’s some free legal advice. If you receive a section 172 notice take legal advice from a solicitor who specialises in motoring law if you need it, complete the form and send it back yourself. It is probably wise to retain a copy of the completed section 172 notice and to send it back via recorded delivery – yes, if you were wondering, I have acted in cases where the police claimed not to have received multiple correspondence from a defendant only to have her produce copies of the documents and proof of posting to win the case in court.


If you are summonsed to court for failing to complete a section 172 notice then be aware that you could receive 6 penalty points and that even where you have returned the notice a court could find a way to declare you guilty anyway – so get a solicitor!
Director of Public Prosecutions motoring Phiri s.172 notices section 172 notice solicitors speeding
Location: Red Lion St, Richmond TW9 1RB, UK