Acid attacks - MPs plans aren't as daft as some claim 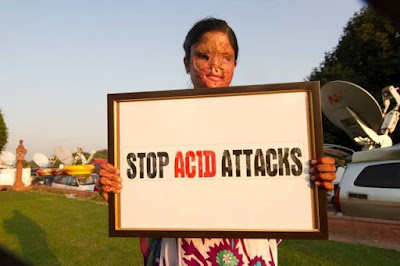 In the past few days there was a spate of attacks committed in a small area of east London, presumably by the same people, over a period of around 90 minutes in which acid was thrown in the faces of moped riders who were then robbed of their vehicles.

The use of acid seems to have become more common recently, although whether that is because there are more acid attacks or because they are more widely reported I don’t know. What I do know is that 10 years ago my old firm dealt with a case in which a teenage girl was gang raped over a number of days then disfigured by having caustic soda poured over her face and body. While I think it is more strictly an alkaline, lime was used centuries ago to blind attackers by pouring it on them from the battlements above.

Whether acid attacks are truly new or not, the recent London attacks has led to calls for a ban of the sale of acids to the public and regulation as to who may possess them. MP Stephen Timms tweeted that carrying acid should be an offence, that a licence should be required to purchase sulphuric acid and that the courts should take a tougher, more consistent, approach to sentencing.

In so far as sentences are concerned he may have a point. The definitive sentencing guideline for sentencing assaults notes that use of acid will indicate higher culpability, which increases the sentence. In theory, the maximum sentence is one of life imprisonment. In practice, the guidelines indicate a range of 9 to 16 years in the most serious cases. That’s why in the case of Christina Storey and Ashley Russell who trapped a motorist then threw acid over him causing horrific injuries received sentences of 8 and 12 years respectively.
Michael McPherson received a sentence of 8 years imprisonment for committing a completely unprovoked attack on a fellow cinema goer that left him with life changing facial injuries that are still being treated years after the attack.

In a third attack, Katie Leong received a life sentence for pouring acid over her sleeping lover. Her attack was the most serious of the three that left her victim blind in both eyes. However, it is worth saying that blinding somebody is a very predictable outcome of pouring acid in somebody’s face, so those who don’t blind do so more by luck than judgement. It’s also worth saying that it appears Leong was convicted of attempted murder while the others I’ve mentioned were all convicted of GBH, which I suspect explains the significant differences in sentences.

So, could sentencing powers be tougher? No, life is the maximum sentence in most of these cases even though life seems to be rarely imposed. Could they be more consistent? Quite possibly. I have only the press reports to go on but I cannot see an obvious reason why two unprovoked attacks both leading to similar life changing injuries should warrant a difference of five-years imprisonment between the attackers nor why one attacker received a much lower sentence for taking part in the same attack. Mitigation may explain some of the difference but when you are throwing acid in another person’s face there’s only so much mitigation can, or should, do.

Let’s turn to the meat of the proposal. First, banning anybody from carrying acid. I assume that Mr Timms is not proposing an all out ban on sulphuric acid since it’s a common and useful chemical so I presume he means ban it unless you have a good reason. If that’s the case then his proposal mirrors section 139 of the Criminal Justice Act 1988, which outlaws the carrying of pointed or bladed articles in public (knives in most cases but also screwdrivers and the like). Section 139(4) creates a defence whereby the possession of a pointed or bladed article is lawful if you have a “good reason or lawful authority”. To that end, it is perfectly possible to create an effective law to outlaw the carrying of acid in public. Good reasons might include people who have just purchased the acid and are taking it home or those carrying it as part of their employment, for example.


I understand that Amber Rudd, the Home Secretary, has gone further than Mr Timms by declaring an intention to create a new criminal offence, presumably along the lines of section 39. I don’t object, but I do note that carrying sulphuric acid in a container that could be easily squeezed over somebody would appear to be an offensive weapon, in such a case it must be either something adapted to be used as a weapon or even something that has no other use but as a weapon. Containers used by manufacturers to supply drain cleaner can be a bit bulky for carrying on the street and spraying in somebody’s face necessitating the transfer of the acid into a smaller, more manageable (and more easily hidden) container. At that point, it must have been adapted for use as a weapon. The argument that it could be used to clear a drain is, I would suggest, nonsense because there probably wouldn’t be a sufficient quantity to actually clear any blockage that required really powerful acid. They’d also be no obvious reason for storing the stuff in anything other than the original container if that was your motive for carrying the stuff on the street.

Only selling acid to those licensed to have it is equally possible, although I’d suggest it creates an unnecessary burden on both business (who would have to spend money applying for and maintaining their licence) and individuals (who would not be able to purchase it) while doing nothing to prevent a similar attack taking place.

Why do I say it would do nothing to prevent a similar attack? For two reasons, first that sulphuric acid is a convenient product to use but it is not the only one that could be used in the type of attacks seen in London this week – in my shed you’ll find a litre of sulphuric acid, quite a bit of white spirit, caustic soda and a flame thrower, well okay it’s a paint stripper but that doesn’t sound as cool. Many years ago, I was sent to sit in on a handwritten interview with a guy who was confessing to a similar style robbery to these acid attacks. The defendant would enter a shop, throw petrol in the face of whoever was behind the till then threaten to burn him or her alive unless money, booze and fags were handed over immediately. Nobody refused to comply. While the physical injuries were light, the psychological scars must still haunt the victim’s dreams.


If we are banning acid because it can be used in attacks, does that mean we will also be banning anything that can be used in this type of attack, e.g. paint stripper, white spirit, caustic soda, petrol, etcetera.

The other reason I doubt restricting sales of drain cleaner would prevent future offences is I very much doubt that the London attackers actually bought the acid they used anyway – I mean if you are going to steal motorbikes then why would you pay for acid that can be easily stolen too? That means that for this to be effective any potentially harmful chemicals must be removed from shop shelves to prevent thieves just taking it.

I know what I’m about to suggest will be unpopular because we all know that only very long sentences and harsh retribution against offenders works (that’s not true), but how about addressing the underlying cause of the problem. I’d suggest that one of the major cause is violent gangs “running” the streets and having very serious control over the lives of young people in areas where these attacks took place. The reason gangs exist is because of drugs and a lack of policing in the areas, which itself is the result of a lack of funding. I suspect that the government could resolve many of these problems by legalising most, if not all, currently illegal drugs and controlling their supply. Combine that with an effort to properly fund police and prosecutors so they can investigate, arrest and prosecute the leaders of criminal gangs. I’m not saying that would solve all crime, but it would have a huge impact on offending by gang members.
Acid assault criminal law drugs gangs law reform MPs Politicians weapon
Location: Red Lion St, Richmond TW9 1RB, UK