Stupidity of the system 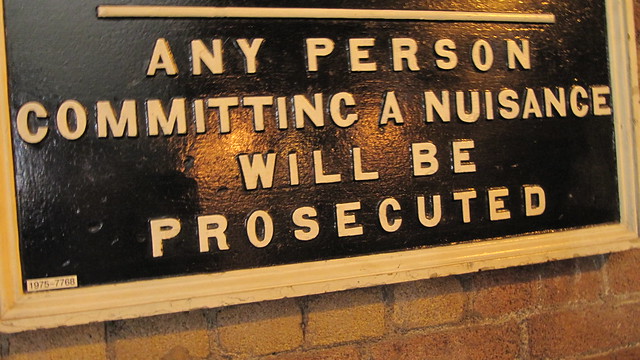 I sometimes find myself despairing at the stupidity of the Criminal Justice System.  It's 5am as I write this and I've just had a client charged with the offence of causing a public nuisance, which is an ancient common law offence of little value in the modern world - I tend to think that when an offence is so rooted in history that nearly all the major developments happened not in this century, nor the one before and only barely in the one before that it may be time to let the offence quietly die.  The earliest case on public nuisance I can easily find that is still relevant dates from 1703 and the current definition of the offence appears to date from sometime prior to 1835!

Public nuisance, no matter how ancient, isn't the stupidity that has me up and annoyed when I should be asleep.

In this case, the accused was transiting the UK at a major airport.  His flight was delayed and staff found his behaviour sufficiently egregious that they called police after a threat was made (but not carried out) to damage the airport carpet.  The accused denies that this happened.

Any sensible person would look at this relatively minor offence by a foreign national, kick them out of the country and ban them from ever returning, even simply to transit through.  Given that the UK is one of the world's major transit hubs you'd think that this would cause difficulties enough.  But no, here in the UK we would rather charge somebody with an ancient offence and hold them in custody to ensure that they miss the flight that would relieve the British taxpayer of the burden of dealing with them.

Assuming that this person is convicted, they are going to receive a small fine at worst - I say this because despite the charge this is really an allegation of making threats to cause criminal damage under s. 2 of the Criminal Damage Act 1971.  The Magistrates' Courts Sentencing Guidelines indicate a maximum of a fine where actual but minor damage has been caused.

Given that this person denies committing the offence, what will the system do if she enters a not guilty plea and chooses to be tried in the Crown Court?  They'll refuse him bail and keep him in custody resulting in a huge cost to the taxpayer.  I've seen this done before in other cases and only once have I managed to successfully persuade a court that simply because somebody is a foreigner doesn't mean that they are going to fail to attend court.  In the last case of this type, a man was accused of going equipped to shoplift - nothing had been stolen.  He had no previous convictions in the UK, denied the offence and was remanded in custody to await a trial that had been set for two-months hence!  The sentencing guidelines indicate a sentence of up to a community order, i.e. not prison.

I'm not arguing that foreigners should have carte blanche to do as they please in the UK without fear of punishment, but what I am saying is that when an offence is so minor that the only realistic punishment is a small fine (that will probably never be paid) then it is not in the interests of the British public to prosecute and spend taxpayers money on what is effectively a pointless prosecution.

I've always found the following to be the wisest part of the Code for Crown prosecutors:


"5.6   In 1951, Lord Shawcross, who was Attorney General, made
the classic statement on public interest, which has been
supported by Attorneys General ever since: “It has never been
the rule in this country — I hope it never will be — that
suspected criminal offences must automatically be the subject
of prosecution”. (House of Commons Debates, volume 483,
column 681, 29 January 1951.) "